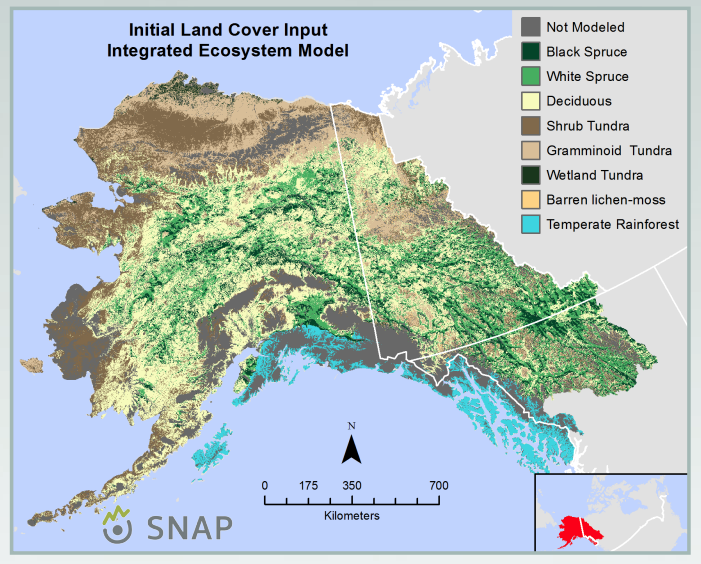 These land cover datasets represent highly modified output originating from the North American Land Change Monitoring System (NALCMS) 2005 dataset. This model input dataset was created solely for use in very large landscape scale modeling studies and is not representative of any ground based observations. There are two versions used in the IEM project. One is utilized by ALFRESCO, the other is a version built from the ALFRESCO land cover dataset and is utilized by TEM.

Code used in the reclassification of the LandCover_iem_ALFRESCO_2005.tif can be accessed on GitHub at: copy and paste please: https://github.com/EarthScientist/NALCMS_ReVeg_Classification * Master Branch is the current version

Methods of production of the LandCover_iem_ALFRESCO_2005.tif:

These derived layers are: north_south - this layer is derived from Aspect calculation (in degrees) of the PRISM 2km Digital Elevation Model (DEM). It constitutes a reclassification into 3 classes: North, South, Water. The classification scheme used to reclassify the aspect map is as follows: south = greater than 90 degrees and less than 301 degrees (value=1). north is all else (value=2), water (value=999). It is important to note here that when calculating aspect there are situations that arise where there is no slope and therefore no aspect. In these situations the flat areas were reclassified as NORTH (2) unless they are a body of water. Water bodies were extracted from the NALCMS Landcover Data and those areas that were both flat and waterbodies were reclassed as water (999).

growing_season_temperature - This layer constitutes the average of the months of May, June, July, August, from the 1961-1990 PRISM climatology, resampled to 1km using a bilinear interpolation.

Nowacki (2001) chosen features include 2 classes of the "LEVEL_2" ecoregions in that dataset where Intermontane Boreal (a.k.a. Alaska's Interior) was classed as 2 and all other ecoregions (all coastal) was classed as 1. This gives a differentiation between the wetlands classes that fall into each of these two reclassified regions, allowing for the creation of an Spruce Bog class from the "wetland" class in the NALCMS 2005 Land Cover Classification.

With the area of interest including sites in Western Canada, it was important to differentiate the coastal and inland boreal ecozones/regions in order to mimick what was done on the Alaska side. To do this the Canada Ecozone/ecoregion data involved the following:

i. In the areas around south Sasketchewan there are large areas of prairie, which also coincides with the bread basket of Canada since their green revolution. Since this area is not boreal forest and is a heavily human-will dictated environment (since it is mainly farms) it is not a good candidate to include in this classification. removed the Canada Ecozone "Prairie" and Canada Ecoregion "Interlake Plain" & "Boreal Transition"; both of which exist to the North of the excluded "Prairie" Canda Ecozone. This was determined to be removed by examining the input NALCMS Land Cover map and inspecting visually that there were little to no trees in these areas.

ii. To extent the "coastal" region beyond the southern extent of southeast Alaska, it was determined that the Canada Ecozone "Pacific Maritime" should be classed as coast to differentiate between coastal and non-coastal wetlands. Therefore this was added to the non-"Intermontane Boreal" classes from the Nowacki AK ecoregions map.

iii. The southern-most extent of the new coastal vs spruce bog layer is the international border between Canada and the U.S.

treeline - This layer was created by rasterizing the Circumpolar Arctic Vegetation Map (CAVM, http://www.geobotany.uaf.edu/cavm/) and defining the treeline using the extent of this data. The result is a boolean map where 0=no trees and 1=trees.

The steps of reclassification of the NALCMS Land Cover Map are:

These classes were collapsed to:

classes 1,2 were reclassed as a spruce class.

classes 5,6 were reclassed as deciduous

class 11 was reclassed as shrub tundra

Methods of production of the LandCover_iem_TEM_2005.tif: