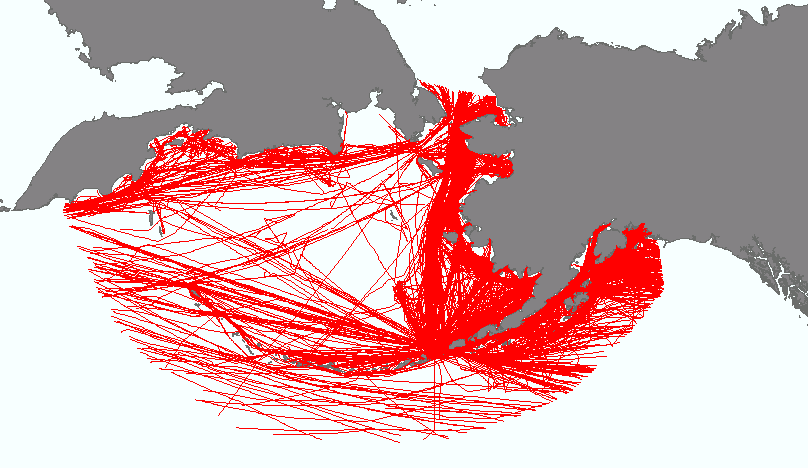 These shapefiles (lines) are a derived set of shipping voyages from satellite-based Automatic Identification System (AIS) data collected from the exactEarth (http://www.exactearth.com/) satellite constellation. The files were large and disjointed CSV files that have been cleaned using tools developed in the Python language. The code is available via the link below.

The original point locations were obtained via the exactEarth company, and include copyrighted material of exactEarth Ltd. All Rights Reserved.

If users would like the original point locations, they should contact exactEarth (exactAIS@harris.com/) for information about licensing the data.

The project was made possible by exactEarth’s data stream and funded through the The Wildlife Conservation Society (WCS) and the Aleutian Bering Sea Islands Landscape Conservation Cooperative (ABSI). The codebase was built through a collaborative process with the Scenarios Network for Alaska and Arctic Planning (SNAP) at the International Arctic Research Center at the University of Alaska, Fairbanks Alaska.

Please give attribution to exactEarth, SNAP, WCS, and ABSI.

Attributes include original AIS values. Additional ones we calculated are listed below: